When I found out that I needed to have gallbladder removal surgery, I didn’t know anyone that had gone through this to talk to. I scoured the internet to see if anyone had shared their stories from start to finish. I didn’t find much so I wanted to put this together to share my experience starting from the first gallbladder attack to now living with one less organ.

It was New Years Eve 2018 and I went out for a barbecue lunch with some friends. If you live in Austin, you know the barbecue here is second to none so we went all out and got the Texas Trinity of ribs, brisket, and sausage. It was moist, meaty, and delicious. However, after that meal I felt bloated and my stomach gurgled for the rest of the day.

The next morning I woke up with an achy back and figured I probably just slept in a weird position. As the day went on the pain became stronger and more apparent in my abdominal region. At this point it felt like cramps but like the worst cramps I’ve ever had in my life. It was like someone kicked me in the stomach and twisted my insides. The pain was so strong that I could not function. I was curled up in a ball on my bed with all the lights off, in silence. Nothing helped. It was the weekend so I figured I would try to sleep it off and go to my doctor on Monday if the pain continued.

I woke up Monday morning feeling perfectly normal like nothing ever happened. Fast forward to Wednesday, I woke up at 4AM with that same initial achy back pain except this time it was worse. As time passed the pain similarly moved to my abdomen. I couldn’t go back to sleep so naturally I WebMD’d all my symptoms and started palpating my stomach. The pain was the strongest in the upper right quadrant.

I made a doctors appointment that day. Straightaway my doctor said “it’s your gallbladder” and scheduled me for an ultrasound to confirm. The ultrasound showed that I had sludgy bile and multiple immobile gallstones. The two episodes of pain I had were gallbladder attacks. My doctor recommended gallbladder removal surgery (cholecystectomy) because it’s minimally invasive, a common procedure, and prevents future attacks or rupture. She also informed me that surgery was not necessary but I would be more susceptible to unpredictable repeat attacks and/or rupture.

I didn’t know anyone who had gone through this that I could talk to so I went home and did a lot of searching through Google and Reddit. I wanted to read other people’s experiences with gallbladder attacks and surgery. Ultimately I knew I never wanted to experience that pain again so I chose surgery. My gallbladder removal surgery was two weeks away from the date of diagnosis. During this time, I didn’t have any more attacks but my stomach felt sensitive and extremely bloated. I put myself on a pretty strict low-fat/low-spice diet per my doctor’s recommendation. I ate lean meats, veggies, and drank lots of golden milk, which I really believed helped to soothe my stomach.

The gallbladder removal surgery was laparoscopic, minimally invasive, and an outpatient procedure. I did have to go under anesthesia and was put on a ventilator. I was asleep the entire time and didn’t feel a thing. The surgeon made four half inch incisions in my stomach to place the scope and remove the gallbladder. Everything went smoothly and I even got a photo of my gallbladder and its contents as a souvenir. Apparently I had a lot of stones for someone my age. I was in and out within a few hours. My fiancé drove me home, I took some pain meds, and slept for most of the day.

The first two days after surgery were the worse. I was extremely sore and my throat was scratchy from the ventilator. A natural reaction would be to cough but that caused immense pain to my stomach. It was just an endless cycle of discomfort. Additionally, it was difficult to go from standing to sitting to laying down so I was pretty dependent on my fiancé. After those two days I was able to move by myself although it was still difficult. After one week I was able to walk slowly and return to work. Around the two week mark was when I began to feel normal again.

Life without a Gallbladder

As I am writing this, I have been without my gallbladder for roughly a year and a half. In the short term I had to be careful with spicy and fatty foods. I slowly integrated them back into my diet so my body could learn how to digest foods without a gallbladder. In the long term I essentially have irritable bowel syndrome and a lot of times have to go to the bathroom within minutes of eating. Certain foods trigger it more than others such as those with high fat or spice content like pizza. This is a common side effect. For some it goes away for others it doesn’t. Mine hasn’t gone away yet but my doctor gave me options to manage it: diet or medication.

The FODMAP diet has been shown to be pretty helpful for those with IBS. Personally, I find it too restrictive and difficult to commit to 100%. In terms of medication, my doctor prescribed low dose amitriptyline that can be taken once a day regularly or as needed. I prefer natural remedies whenever possible so I do not take the medication on a regular basis. The only time I use the medication is when I am traveling since finding a bathroom is not always reliable. Overall I am still able to eat whatever I want to eat, do whatever I want to do, but I also got to go when I got to go. I also have visible scars from the incision but they’re pretty small and I think they’re kind of cool! 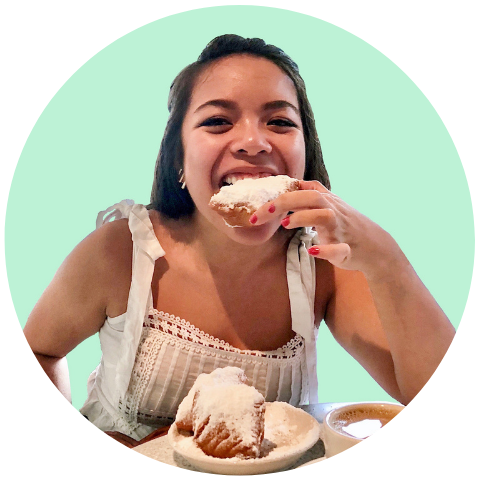 just a girl trying to decide what to eat

Searching is in progress